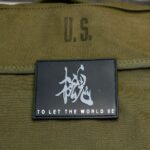 Philanthropy was an anti-Metal Gear non-governmental organization (NGO) founded by Otacon and Solid Snake. The organization was created as a response to the abundance of Metal Gear REX derivatives being developed after the Shadow Moses Incident. The group operated by uncovering information on the development of new Metal Gears, gathering evidence of their existence, and then attempting to prevent their completion, often by destroying them.
Imported from Japan. PVC patch with velcro backing.

There are no reviews yet.